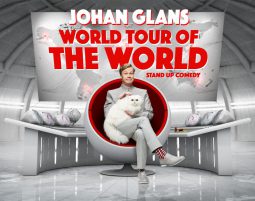 Deze show is Engelstalig! This show is in English!

Johan Glans is one of the biggest comedians in Sweden. In addition to being a popular tv-host and a participant in some of our most popular panel shows, he is a director, writer and a highly regarded actor who has performed in numerous musicals.

In 2008, Johan wrote and performed the stand-up tour “World tour of Skåne” in and around his home town. His show, both mocking and loving of his upbringing in the countryside, was then performed nation-wide to sold-out arenas. This was followed by “World tour of Scandinavia” in 2013, which toured Sweden, Iceland, Norway, Denmark and Finland and was an enormous success.

In 2016, he will finalize the concept and complete his trilogy by touring “The World Tour of World”, visiting every continent before taking it back to his homeland, Sweden.

With his snappy, bold ability and his intelligent humour, he has helped to expand stand-up comedy itself. Glans is also one of today’s most important parliamentarians’. And he is one of few Swedes who can laugh in French. This is the kind of people we need!